Mixquic a place where the deceased return …

Every year it is placed: salt, water, chopped pepper, white, purple and orange flowers, straw, the Syrians are lit, the favorite food of each of the deceased is placed, skulls of sugar, the bread of the dead; but above all a prayer is made for them. The offering is a tradition that has nine essential elements, that if any are missing, it would break the spiritual charm that surrounds this belief since it is a

Celtic action; a concept of faith in the immortality of the soul and likewise, these elements represent heaven, earth, and the underworld.

For the rest of the world, the cult of the dead is a rather gruesome custom; For Mexicans, from ancestral times, has been a reason for one of the most important and distinctive traditions that take place in our country. Mixquic is one of the towns where this event is celebrated in a big way, turning it into a festivity that reflects our national identity. San Andrés Mixquic (in the mexquite). It is located just one hour from Xochimilco and was considered as a Ceremonial Center for the Mexica, therefore it is also considered rich for being an archaeological site, where the most representative pieces of this culture have been placed, it is a worthy place to be  visited, as well as its surroundings, where there are convents, chapels, temples and parishes dating from the sixteenth century.

The rites around the death that they carry out year after year, connect their conception with respect to life since they are a bridge of communication with the dead because they are the days that coexist with them because, for the inhabitants, death is a presence and no absence.

Part of their rituals begin from mid-October with the preparations and thus begin between the 31st and the first of November to that celebration, with twelve bells of the Parish of St. Andrew the Apostle announces  the arrival of the souls of the children, and the comments  they must place a star, a small barrel or paper cross at the door of their house and a candle is set up, this to guide the souls of the children to the place that in life was their home, later their offering is placed.

Thousands of visitors gather every year in the vicinity of the town and especially in the Pantheon of the Parish, to witness the purest tradition of Mixquic. Dismiss the faithful departed who will take their way back to their eternal abode, an act that is known as the illuminated.
During the days of the celebration, Mixquic becomes full of lights, aromas, and flavors.

The town offers a variety of activities and attractions that it shares with residents and visitors who come together every year to experience this experience that surrounds the town. It is estimated that more than 15 thousand visitors like to witness the festivities in awe, as well as the sawdust carpets that form flowers and images.

Located southeast of Mexico City, in the Tlahuac Delegation, today this community is made up of four neighborhoods which fight for not being overseen by the urbanization and preserve its rural 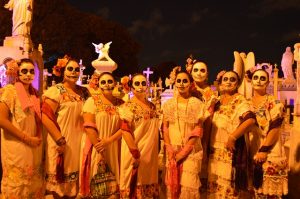 atmosphere. This is how Mixquic is an obligatory destination because its appeal goes beyond the Day of the Dead. You can not miss the excellent family atmosphere and the good treatment of the people, making you participate in this magnificent event. Come and know our traditions and above all… Leave them!

We use cookies to ensure that we give the best user experience on our website. If you continue to use this site we will assume that you agree. ACCEPTRead More
Manage consent

This website uses cookies to improve your experience while you navigate through the website. Out of these, the cookies that are categorized as necessary are stored on your browser as they are essential for the working of basic functionalities of the website. We also use third-party cookies that help us analyze and understand how you use this website. These cookies will be stored in your browser only with your consent. You also have the option to opt-out of these cookies. But opting out of some of these cookies may affect your browsing experience.
SAVE & ACCEPT